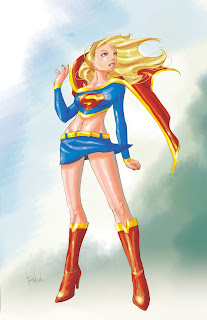 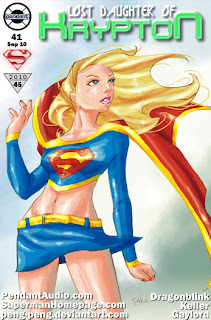 yep, just another work day with me and my 80s music. but i have my new spiced pumpkin candle from Yankee Candle lit and enjoying the cooler temperature in the house cuz autumn is finally here!! so please excuse the cheesy karate kid song. =P
i meant to post this last week when it was unveiled. =D this is my first cover for PendantAudio.com's Supergirl:Lost Daughter of Krypton radio show. this is for their episode #41. my hubby, theFranchize, does the Superman covers so it's kinda neat that we're working on these together - sorta. we'll be making a superman/supergirl halloween desktop to post on that website too so keep an eye out for that! but these covers show up the last wednesday of each month on SupermanHomepage.com which is when that month's radio show airs. the first image is the full piece and i had to crop it for the actual cover (logos and stuff were placed by Pendant Audio).
so even though she's just standing there, i actually went through 2 other versions just to get to this one. i think it was one of those things where u psych urself out cuz u wanna make a good first impression then after many failed attempts, u realize it's gotta get done. so instead of trying to make it reflect the story that it was for, i figured i'd make it like an introduction to my version of supergirl. so there u have it. next month's will be a little more about what's going on in the story itself. i'll be doing these covers on a monthly basis so if anything else, i'll at least have new Supergirl artwork each month. =)

btw, i'm gooood and 30 now so there's no point in crying anymore. i feel better though. the hubby took me to see Cirque du Soleil for my berfday and it was such a neat experience that i feel i may not have appreciated as much in my 20s. so there u have it. 30s, here we go!