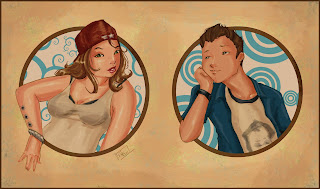 as i sit here at midnight with a bottle of corona getting warmer by the second, i try to find the strength to work but instead i decided to update this. =) it's work, but fun-ner! this weekend's been pretty nutty for me with parties and things. but alas, it had to end sometime and work is like a wedgie - u can only ignore it for so long before u gotta get up in there and do something about it. =P

so this is my second attempt at drawing a pin-up for a couple of fellow indie publishers for their book, the Uniques. the characters are Motherboard & her boyfriend Ray. not sure where they'll put it or when so when i know, u'll know. =) the first one i did (see September 25th entry) was just a little far from the characters' original designs. basically, they weren't chunky enough. as a bigger girl, i was just trying to make a statement that big can be hot. but oh well. the original one will probably make it in my artbook next year. woohoo!
huge influence for this pin-up style was Loish. she's an incredible artist and blends a manga-ish/disney-ish style with her own style to make what can only be described as "buttery goodness." i decided to stop with the hottie concept and just go with cute. at any rate, if ur wondering how i made that background, well i'll tell ya ---- it was completely by accident. very random and i can't even remember which spatter brushes i used but i'm glad it came out the way it did. it gave me the desired "worn" look when i messed with layer opacities so i guess if it ain't broke, don't fix it. =P