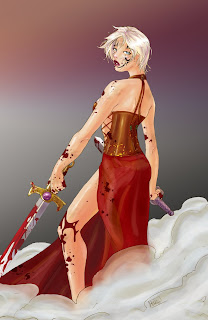 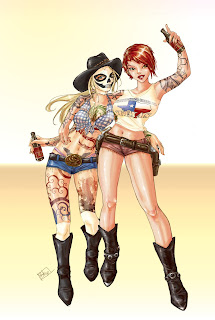 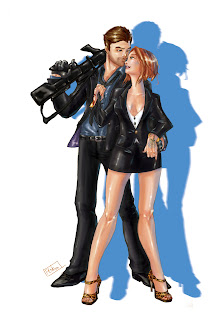 i'm workin dilligantly to finish these commissions from the super sale and here's some that are finished already. the first one is an original character named Jess for someone on deviant. i originally had her without blood but i thought it was too plain. luckily the client liked the bloody version too. =)
the second two are both for one person on deviant. i think some of them are her characters and some are her friends'. (not sure which ones tho.) she ended up liking them which i'm really glad about. the two girls are Daisy & Lily (lily's the tall one with the big boobs, daisy's the one with the skull mask on). the words on her shirt and the texas image are digital cuz i didn't trust myself enuff with handwritten/drawn typography. the Budweiser American Ale label i got off the internet. i figured it would be cooler to see an actual beer label in their hands than something i made up (which probably would've ended up as some perk drink from Call of Duty).
the guy and girl are Adam & Julia. that's probably the best gun i've ever drawn. maybe even the best dude i've ever drawn too. =) we're makin progress!! her feet turned out pretty well too. i always have a hard time drawing toes but i think having had to draw so many barefooted commissions at Otakon helped me out for this one. her shoes were a specific request from the client. i never would've thought to draw leopard-print manolo shoes. frankly i'm just not that trendy which, if u know me, u can judge from my usual ensemble of tshirt and jeans. =P [everything about the two commissions are pretty specific requests from the client - i just drew from instructions. ^__^]
in other news, i'm starting to get more comfortable with our new wacom intuos. squeee!