there goes my baby

well here's the well-past-due blog update. i'm really sorry. both theFranchize and i are still recovering from the fantastic Otakon weekend and all the computer problems which, by the way, we're still somewhat dealing with at this time. if there's one thing i absolutely hate and think is a complete waste of time is a friggin virus in my computer! what the frack!? seriously what is the purpose of making viruses except to be a general nuisance?! i'll stop myself before i start ranting about it. i just want all the virus-making people in the world to know that i hope u all come back as a dung beetle or Seth Rogen's anal bead in ur next life. (sorry to be so graphic but it really burns my bum.)

at any rate, like i mentioned, Otakon was friggin fantastical! i was afraid that we would be so ignored because of our non-anime subjects and not-quite-manga style of art. (which we learned is what anime-lovers call "western art." how frickin cool is that!) but, on the contrary, it drew quite a few people in saying that it was cool to finally see some "western art" in the artist alley. i do wonder if all the other artists in there were givin us the stink-eye for all the superheroes we were flashin around on our prints. (tho, i tend to think everyone's givin me the stink-eye, but that's a whole other topic - on the next episode of Oprah.) the only downside (other than the fact that we were in there for 13 hours in Artist Alley friday and saturday) was that i didn't get to experience the con like usual! i only got to walk around the dealer room once! blasphemous, i know! i tend to spend the entire 3 days in there as much as i can buying stuff with money i don't have. but when i think about it, would i rather go and spend money i don't have only to go home ridiculously broke OR make money selling my art and get loved for the way i draw?? --- yeah, i knew u'd think it too. =) i still managed to get the Ame-Comi Wonder Woman statue i never ever see anywhere cuz it gets bought the moment it appears. so BOOM! i win. =P 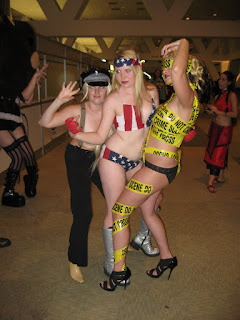 seein as how i didn't get to walk around, i certainly didn't get to take any pics either. when i was at the table, there were definitely some cool cosplayers walkin around. a couple of the zombie folks really freaked me out too. they were the nicest folks but they had these crazy contacts that made me feel like they were staring into my soul! and the fact that they were so nice made me really afraid that i wouldn't be ready when they reach over the table and start eating my brains. according to Zombieland, i'm already SOL on Rule #1 - Cardio. =( i did get a shot of these 3 chicks dressed as different Lady Gagas. wasn't expecting those but i guess i should've. i mean, who's more costume-y than Lady Gaga at this time?? (and of course, lots of gratuitous butt-shots but that'll come later whenever i take the time to create my collage. crazyness.) 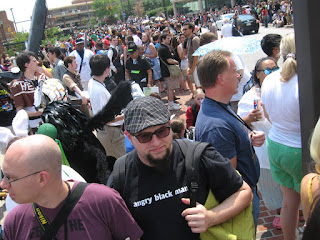 biggest NON-highlight of the weekend was the stupid fire alarm that went off in the middle of the busiest point of sales on Saturday. curse u to whomever pulled it or set off some piddly fire. everybody had to evacuate and we were outside for more than an hour. the con didn't really resume until about 2 hours after that because everybody in the artist alley (and probably the dealer room) had to check back in. we couldn't even get behind the tables until every person checked in. *sigh* completely understood why but it was still quite the blower. so those were sales that we'll never get back. 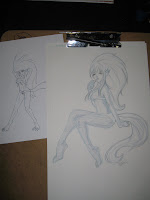 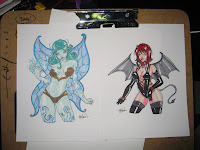 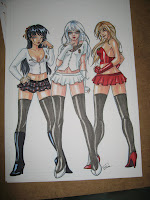 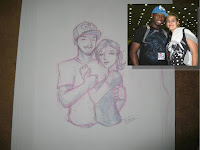 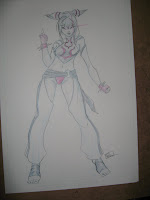 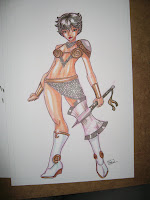 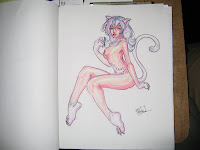 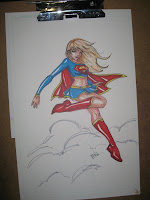 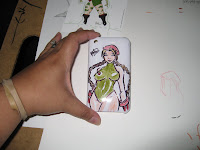 still, we managed to have a fantastic show. theFranchize and i did a ton of commissions and they were all friggin fun! i'm posting all the ones i did that i managed to take a pic of before i gave 'em to folks. this one really cool couple asked me to draw an anime version of themselves so that was kinda nifty. never did that before. and one guy even had me draw on his iPod case. how flippin sweet is that! hardest thing i've ever had to do tho. copics and microns are NOT easy to apply onto that surface.

i managed to get a quick video of these folks dancin. it was pretty hilarious even tho i was too far to hear the music. dude in the leather outfit freakin pyramid-head guy was great! but apparently a staff person turned their party off and Cell had to put away his boombox. party pooper!

from this point on, i will make it a point to be watchin those Otakon bulletin board thingies so i know when to register. i never want to miss another year of setting up ever again! and hopefully at least one other member of ID Comics will be able to come too and i can actually get up to go to the dealer room twice! =

the ipod case is so cool! i wish i had an iphone JUST for the accessories and possibilities like that. and it's not really about keeping up with the Otakon boards, it's more about being at your computer at zero hour, mouse in hand

I am AMAZED at your work and would just like to see you in action one of these days. You did all those as commissions at the con?? How long does it take you to do them?

I really like the anime-style couple. That was really cute. Did you color it? I like the fairy ones, too. I ESPECIALLY loved the iphone case... the way the markers looked on that surface... pretty neat... like an impressionist painting!! I loved how it turned out. Did you have any fixative? How did it not smear? I hope the person was very careful with it. I wouldn't even use it on my iphone, if I was that person!! not that I even have an iphone... haha

edit to my comment: I meant to say watercolor painting... not impressionist :)