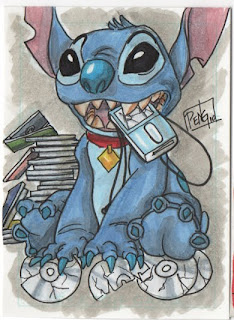 before i call it a night after a full day of working on one two-character commission, i wanted to post up this Stitch sketchcard i did for my ninja friend that i mentioned in an earlier blog. i saw her at Otakon and finally gave it to her so she was thoroughly surprised. =) at any rate, as promised here is the card. theFranchize did one for her as well but i'll leave that up to him to post on his blog - theFranchize Live.
this card actually didn't take much time to do except when i had to look for Stitch references. cuz i dunno about u but i certainly can't pull him out of my head. i can pick him out of a crowd no problem but to recreate him is not the easiest thing, especially since Lilo & Stitch had such a unique art style. if ur askin what's with the cds and what's that thing in his mouth?? it's a Zen (mp3 player) which she and i both have (except mine is black). the busted up cds are because his BADNESS level is way up! =P