how deep is your love 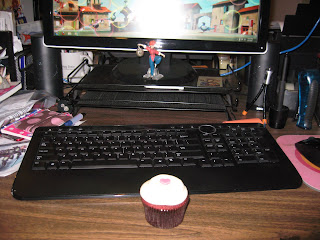 before i get elbow deep in commissions, i wanted to post what was on my art table for the past couple of days. that's right, a delicious delectable delicious (did i say that already) red velvet with cream cheese frosting and fondant heart Georgetown Cupcake! theFranchize got some after weeks of me crying for it since TLC came out with the show about them called DC Cupcakes. the show itself is kinda wack cuz it all feels scripted but it was yummy-licious way before the show cuz my BFFFs got me some last year for my berfday. and wowsers it was good. they have tons of orgasmic flavors but i think the red velvet is my fav so far. i was very sad when the dozen cupcakes were gone but it was probably for the best cuz it's not exactly in the category of healthy foods. he said the line at the actual store (the one featured in the show) was far worse than what the show depicts. but they recently opened another one in Bethesda, MD so that line was far more tolerable. the picture doesn't do it justice cuz i'm no photographer. just know it was delicious (if i haven't mentioned it before.) =D 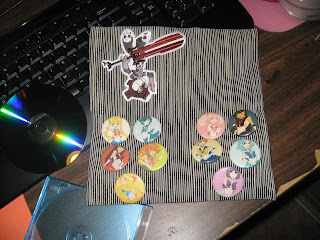 this is a picture of my pencil pouch that i tote around now. i got it from Cheeks Galloway at Heroes. the character on it is one of his original characters. i love my pouch cuz it's so handy without being cumbersome. but the buttons on the back are my new fav addition to it. my hubby got it for me at Otakon from this girl. she really took a liking to his art so after she got a print from us, he went to her table and got a print from her and she threw these really cool buttons in. gotta love Sailor Moon fan art!! (unfortunately i don't remember her name. =( i suck i know.)

And DISLIKE on your cupcake photo... ONLY because I am SUPER jealous!!

Your fave isn't the mint chocolate cupcake?? I would have figured that was your fav!!! I could use one of those right now...

Yeah their show is SO badly "acted" that it is obvious that there is some directing going on... Oh well, their cupcakes make up for it!!! I wonder how much they charge to cater?