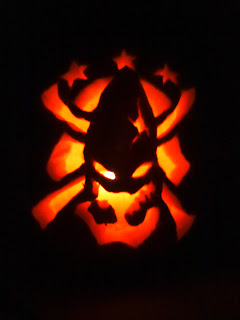 so tonight i decided to join my former co-workers at the dog kennel i used to work at to carve pumpkins. last year i carved a pumpkin for the first time with them after work and i was realizing i probably wouldn't do it again by myself at home. plus its really messy so i didn't wanna get in trouble with the folks that own this house. =P
now, i realize i have the pumpkin carving skill of a 5-yr-old but does that stop me? NO SIR/MA'AM! last year i carved a frankenstein head and someone thought it was spongebob. =( but since i had a year's experience under my belt, i decided to take the difficulty to the next level. or, in this case, LEGENDARY! and, as i did last year, i accidentally cut a chunk out of my masterpiece. FAIL. i tried to affix it back onto the shape with a toothpick but it seems in all the chunky mess, i happen to pick up and affix what appears to be the incorrect shape. so oh well, it works anyway. and if U didn't notice anything out of place, then we'll just leave it at "yes i did that on purpose."
in case u don't know, i used an image from my current fav game - Halo:Reach. this is the symbol for the "Legendary" difficulty which, in retro video game talk, would be the "Hard" setting. except Legendary difficulty will kick Hard difficulty's arse. =P if u didn't see it until now after reading this, it's ok. like i said, i suck at pumpkin carving. it's still fun though. i hope that when i finally have a kid, i'd do this with them each year. plus the dogs love to eat it AND it helps prevent them from having diarrhea. that's practically a double rainbow, all the way!

nice!!! i wouldn't have noticed the hiccup on your pumpkin if you hadn't said nuthin! haha Looks cool though. My carving is dead and in the trash. I didn't know you had to do it like right before Halloween! Plus my pumpkin wasn't right to begin with... new medium for me, i guess! And I didn't know the pumpkin was edible for doggies! the seeds and all? or just the meat?

yep! pumpkin actually helps doggies with diarrhea! (which, u would think, would actually have the opposite effect.) so if ur pups ever get the squishies, just grab some canned pumpkin and mix with their food and that should do the trick. (much like rice.)
the seeds though, not sure. i think mine ate some but it doesn't seem to be doing any damage. i'd probably steer clear of it tho. =P

so cool! (late comment=catching up to my feeds after 3 months...)