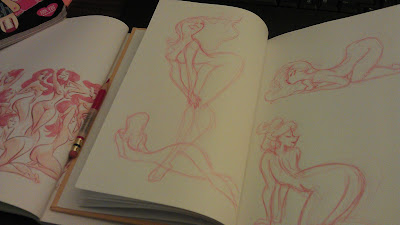 i've been dealing with a lot of artist's block for over a week now but i think i've finally broken through it yesterday. thank goodness! if anyone's ever experienced a true artist block, it's quite a depressing time, especially if u rely heavily on ur art to do work. =/ but i'm feeling much better now. it took studying Bill Presing art and an entire day of classic Disney songs to break me out of it.

[just a note, if u haven't heard of Bill Presing, chances are u've seen his stuff anyways. he's worked for Disney/Pixar and did stuff for Warner Bros. as well. his art is amazing! one thing i'm extremely grateful for SDCC is that i was surrounded by great art and the availability of artbooks that i could take home with me to keep the creative juices flowing. can't get that on the Eastern Shore of Maryland, i promise u.]

so the image above is a study of Presing's work. i've had a few people ask what the secret is to drawing better and i've told each and every one of them to study someone's work that they truly enjoy. draw what they draw and u'll start to understand why they make the decisions they make. (well, that and learn basic anatomy. they don't have to be doctors, just know where stuff goes.) i used to do that in the beginning and that's how i learned what i do. but as of late, i haven't been following my own advice. so, i am finally heeding my own words and that's what i did. 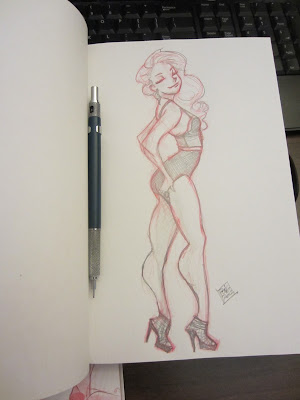 from doing a few sketches of that, i went into drawing a friend of mine. she recently did a personal photo shoot for her hubby and she shared what i can only assume are the more tame pics on facebook. she's a lovely lady and she works out, a lot. basically, she's a brickhouse. =P anyways, i applied my studies to doodle her from one of those pictures and the result is what u see above. i gotta say, i'm pretty happy with it.

Love the sketch!!! And love the new style!!! Is that who she did those pics for? It's very crazy because I have a link to share with you as well... LOL I'll email you...

i think it was. =P i wanna see this link, whatever ur talkin about.