listening to florence + the machine 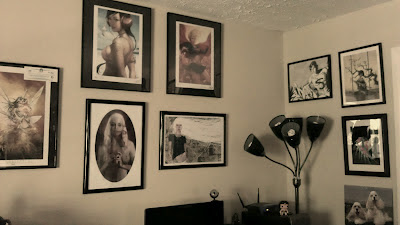 the title of this entry is from this piece of art right above my computer drawn by Erik Jones. i really love his paintings and always amazes me how huge they are. his ladies are always gorgeous but yet grungy/gritty. the "Faith Love" is a tattoo on one of these pieces. i was trying to think of something to title this post and i looked up and that's what i saw. the above is a shot of my half of our lab. tough not to be inspired being surrounded by amazing stuffs.

once again, Otakon was an amazing show for us. if it wasn't for that durned lottery thing of getting into artist alley, we would do this show all the time. but i just love doing anime cons. on a personal level, i fell in love with anime cons before comic cons so i like going to them anyways. but as a person on the other side of the table, being an artist in artist alley at anime cons are so fantastic. the attendees are just so genuinely excited about the art! some may call it geeking out, i think it's unrestrained excitement. the crowd is generally younger and therefore more open to appreciating new things. don't get me wrong, i still love doing comic cons. but for the most part, the comic fans are older and they like what they like. so if u don't fit into what they like, they don't usually give u the time of day. big example, Heroes Con this year was a lot like that. artists that have been in the game for a long time like George Perez, Frank Cho, Mark Brooks, and Adam Hughes always have the most off-the-hook lines. but anime shows, the love is spread all around. 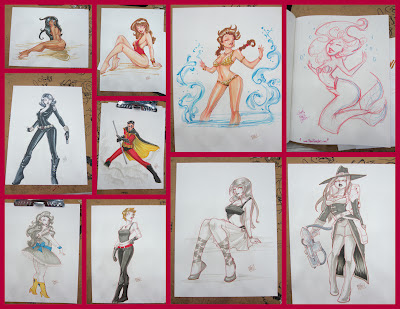 this is a collage of commissions i did at the show. very grateful to everyone that came by and spent their hard-earned dollars on artwork from us. lets us know we're doing something right. next year, i'm making it my goal to have buttons for sale. cuz gosh darned, i love the buttons that everyone comes up with and i wanna do my own! now if i can only make $200 to buy a button maker... 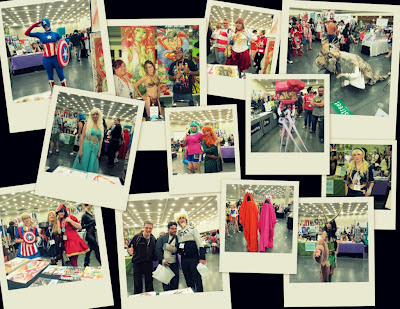 this is a collage of some of the cosplayers there. as always, there are tons of cosplayers at this con. these were the only ones i was able to take. we were really busy during the con and i never even got into the Dealer's room the entire weekend. (a blessing in disguise, i'm sure.) always amazing to see what folks come up with. and despite the terrible stuff that went down in Colorado, and even the scare we had locally in Crofton, MD where an idiot dressed up as Joker at the Batman showing and tried to shoot up the place, i'm glad it didn't stop people from doing amazing cosplays. though, my self-preservation instincts would've liked better security checks in and around the convention center to check that people's weapons were fake. but i guess we're asking too much.

all in all, great fun, great reception from fans, and i got to see my friend that i only ever see like once a year. =)