[listening to "turning page" by Sleeping At Last] 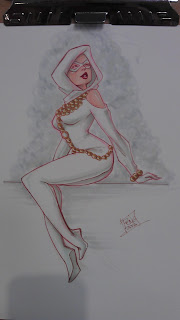 ok so after spending the first half of the day battling a monster of a migraine, the excedrin finally kicked in and i was able to finish ONE thing. sigh. i feel pretty exhausted, mostly from the miserable part of my day. i didn't get to do any warm-up sketches like i wanted either. lame.
anyways, so this is the only thing i have to show for now. we did the VA Comicon this Sunday and i did another commission there for the super-swell-guy Tom King (author of "A Once Crowded Sky"). this is his original character Mashallah (i think that's her name). we were originally supposed to do another one-day con up in PA (which had an ice festival alongside it) but because of a loss in the family last week, we really had to stay a little closer to home. hopefully we'll make it up to those who were looking for us at the other con when Wizard World Philly comes around or something.

Email ThisBlogThis!Share to TwitterShare to FacebookShare to Pinterest
Labels: a once crowded sky, migraine, va comicon