[listening to "the writer" by ellie goulding]


so tomorrow, the ladies of Girls Drawin Girls have an art show in LA with a Motown theme. (for more info on the actual event, check out http://girlsdrawingirls.com/muse-box-motown/.) this was my first opportunity to contribute to one of their shows and it's my first time being in an art show that wasn't at a comic con or something. so despite my lack of knowledge of Motown, i jumped at the opportunity. i mean, just to demonstrate how much i didn't know, i thought Motown was a genre of music that lasted during a certain period of time. names that pop into mind are Temptations, Diana Ross, Stevie Wonder, and Smokey Robinson. between the hubby and wikipedia, i learned that it's a record label. D'OH! and even though those names are correct, there's also Jackson 5 (pre-solo-michael jackson), brian mcknight, and boyz ii men. i've been listening to Motown all along and i had no idea!

but i digress! so here's my piece for the show that i had to mail out to get to them in time. this was inspired by the Jackson 5's "Dancing Machine." since they didn't have music videos back in the day, i based this off of one of the outfits that they wore one of those times that they performed this song (can't remember which show it was exactly). they looked pretty fly, like futuristic superheroes! this piece is called "Dancin Machines" with each lady-robot doing some of the moves that Michael did. (that dude could do the robot the likes of which i've never seen!) i think my personal fav is the one on the left. it's framed and matted at 12x12. it was drawn traditionally, colored digitally, printed and the silver dots embellishments were done with a silver pen. above is the digital piece, below is a scan of it with the dots. i hope folks like it. (i hope more that i makes it to Cali in one piece instead of several.) 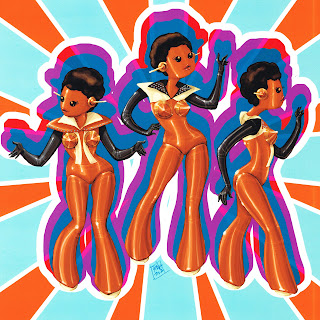