[listening to "one jump ahead" on Aladdin soundtrack] 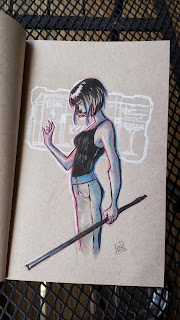 just thought i'd share my sketches in my sketchbook. i posted this a couple of days ago on my other social media outlet (@peng_peng on twitter and @p_e_n_g on instagram). i was trying to get inspired and i ended up drawing a quick sketch of Mako Mori from Pacific Rim. such a cool character that i was pleasantly surprised about in the movie. cuz from the moment i saw her on screen i thought i had her pegged as either helpless smart asian girl or meek girl that ends up bein the most badass Jaeger pilot. turns out she was a little of both without going too far over to one stereotype with an added truly tragic past. (btw, if u saw the movie, that little girl that played her may be the best child actress crying i've ever seen. EVER.) 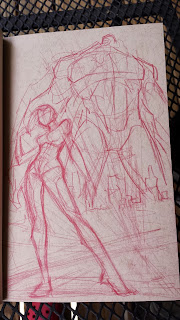 after being inspired from that sketch, i doodled this one with the help of my hubby theFranchize. we're gonna try to cook up this piece before New York Comic Con. when we actually get this pencilled out more, i'll post it. i think i really liked how that mecha tattoo turned out that i wanna draw something else with him. i hope it turns out as cool as i have it in my head. cross ur fingers!
this is still in the works so let's keep it on the hush. ;) 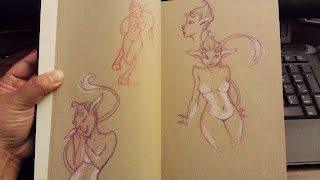 and here's one from a couple of weeks ago. i know i posted it on my instagram but i always forget to post on here. just playing around with character designs. from this i went into drawing that Queen Bee. i'm trying to get better with facial expressions and different angles while making the character look the same. i swear if i went to a proper art school, i bet this would be easier. at least, that's what i think.