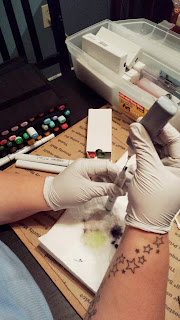 we're headed on out to WV POP CULTURE CON this weekend! as a matter of fact, i'm a weeee bit behind schedule. the con is in Morgantown, WV so if ur in the area, come on by and say 'sup! theFranchize & i are there as guests along with other talents like Ethan Van Sciver and Peter Steigerwald. we'll have plenty of Fanboys Vs Zombies books/trades, our prints that we bring everywhere, and definitely gonna be drawing some sketches for folks. we had such a blast last year and we're very much lookin forward to it again.

before i go, i thought i'd share this pic from last night. it may look like i'm doin some illegal things, but this is what it looks like to refill copic markers. it takes needles, alcohol, gloves, and cotton balls - u know, surgical stuff. so if u've never owned copics and wanted em, this is what it'll take to refill those bad boys! don't worry though, it's worth it. =)

see u guys in West Virginia!