as if by magic 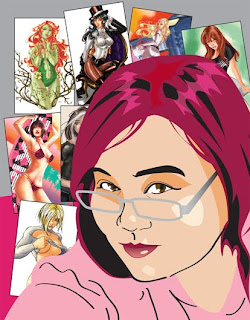 i've finished a couple of things today but one of them i can't post. it's a sketchcard for a friend and she's quite the ninja when it comes to being online. i never know what she can and cannot see of mine and since i would like to somewhat surprise her with this, i don't know where it's safe to show it. =P i'll see her at the end of the month so once i give it to her, i can post it on here. i was a bit proud of it too if i don't say so myself. especially since i personally feel like i suck at drawing on such small surface area.
i've also managed to change my DevArt avatar and id. i took the basic idea of what i had previously and just upgraded it. so whereas it used to be a drawing of me sleeping with sheets of paper of my lineart of different commissions, it's now a vectorized image of me and behind me are sheets of paper of colored pieces i've done lately. i would've made my avatar blink like i did before but i can't remember how to do it and i don't have it in me to look up how. so i'm a little lazy tonite but i'm allowed cuz it's 1 am!

KAKA, can't wait to see it!