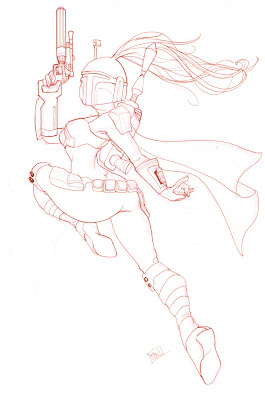 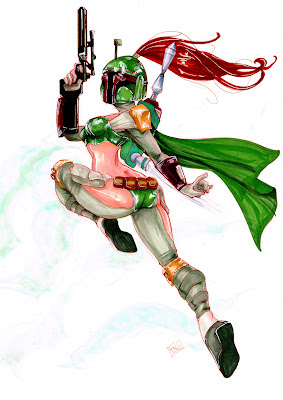 [this new Alicia Keys song shoulda been THE Hunger Games song instead of the Taylor Swift song. too bad it wasn't made yet. =P]

spent a long time finishing up this commission but i hope its time well spent. this lovely lady by the name of Arielle asked me to draw her a female Boba Fett at Baltimore Con. luckily she gave me the option of working on it at home so i could spend more time on it. i've never been asked to do a female version of a star wars character so i needed some extra time. seein as how i don't really have extensive star wars knowledge (go ahead and gasp), i had to keep referencing images of boba fett.
thanks to google, apparently ladies have been dressin up as a female boba fett all over the place! i had no idea. so i had a jumping off point as far as her design. nobody ever had the large openings on the side of her legs though. that was just me embellishing. as usual, i used copic markers and my sepia copic multiliners on this piece. the white scratches are all gel pen. i wasn't really sure how to make her helmet and "armor" parts look like they're peeling so i used the gel pen for that. i hope it worked and it came across as wear and tear. if i made any technical mistakes on any parts of her gun or rocket pack or something, please don't hate me. i did what i could. =)

quick note: the scanner didn't really pick up the light aqua-ish clouds i made in the background or the blue highlights i put on her skin. but trust me, they're really there.