if it isn't love

sung by (the old) new edition

i've finallyhad some time to breath. last weekend was Baltimore Comic Con and it was one of our most successful baltimore cons to date! when we got there to set up, we thought we had a crappy spot cuz we were what we thought was the back, facing the back. but then there was this other section of Artist Alley that apparently was like the land that time forgot. so i think i'm never going to complain about our spot ever again at baltimore. =)
at any rate, we were so busy and had SO much fun at the show. i never tire of saying that i've got some of THE best fans around. we were all pretty much full up on commissions for both days. theFranchize was signing at the BOOM! Studios booth. it was all around fun. and we even had a former ID Studio member finally come by! (we miss u, joe!)
but as soon as we got home, we had to get straight into finishing up issue #7 of Fanboys Vs Zombies and that's been taking up all the time we've had this week. haven't even had time to go grocery shopping. =( lunch has consisted of cream of wheat. and dinner has been this slab of salmon that we've been making last all week long. 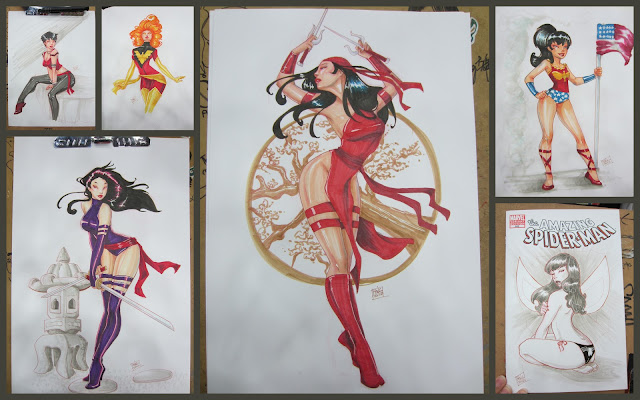 here are the commissions i did that weekend. it may not look like a lot, but i draw pretty slowly (though i've gotten faster from even just a year ago). this was a 2-day show and i got in as many as i could. the Elektra was my favorite of the weekend. if i ever figure out how to clean up this photo, i'll be posting it on my deviant account. i used copic markers and my sepia copic multiliners on all of these.